Honoring The Rainbow Evolution Retreat- Bringing You To The Table

I love performing artists back in the day.

Be it, actor, actress, singer, dancer, male or female.

They bring their entire being into the table, filling up every performance they are in.


See this actress over here, her name is Deannie Yip.

She is famous in Hong Kong for stellar performances, always embodying the character in any way shape or form, even though it is hideous, un-glamorous, or that it requires hours and hours of discipline and diligence.

No matter what, she brings all of her bringing every character and song to live.


I recently had an opportunity to B-R-I-N-G I-T!

Though not in sing or dance.

It was an opportunity to co-facilitate once again, for The Rainbow Evolution Retreat, held at the Center for Natural Therapies.

I never seen really myself being able to hold and assist in someone's transformation.

I know I m good at holding spaces.

But facilitating a bigger group was another matter.

It was an opportunity to do something that I have never done in front of people,


I am a doodler by nature.

Not completely excellent with my drawings and shadings.

There was an unusual knack of recording thoughts and concepts and putting them on paper.

You see graphic facilitation is a process of helping people see their thinking come alive on paper, and see how they relate to other thoughts they float around in the mind.

I did it for myself all the time, but for others, WHOA!

There was 2 options in my mind.

1. Do it.
2. Pee in my pants, curl up like a baby and pretend that this opportunity never existed.


One thing for sure is, I wanted it.

I wanted to shine and be in my element.

I grabbed the markers by the balls.

Why? Because these are some of the results. 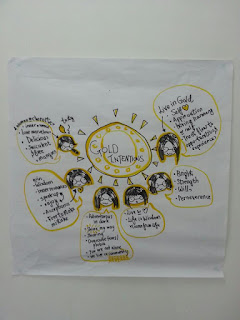 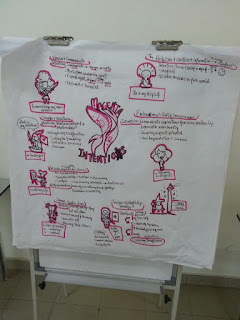 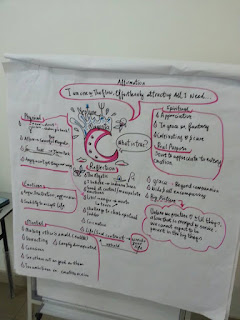 First off, is I never knew I could these. Also, that it could be so much fun, drawing live in front of people, capturing thoughts in real time.

Even better when, the participants came back with feedback that they loved it. Some was amazed I could capture everything, helped them understand what was being shared better, bounce ideas, and one even asked me to write a book!

The point of sharing this is not just to brag, although I am obviously marinating myself in pride.

What you didn't know is the story behind this drawings.

I m not particularly successful or intelligent like most people.

I can't recite to you quotes from a book, I don't have PHD, and I can't expound theories of the Universe to get your god damn approval.

Drawing was a way of escape.

It was a way to stop the buzzing in my head.

It was a way to put thoughts & feelings on paper.

Reason being, I was a hella of a lonely child who was dyslexic and suck at school.

As an adult I seem to like the metaphysical, and spend many hours researching weird ass things that people think it's way too much effort to even research.

In essence,  I was the oddball, the strange character who was a lil crazy, who really still don't feel I fit in.


None of that mattered to enough to stunt the process going forward, because I had my eyes on my goals.

I would do anything that is thrown at me to grow.

And that was how I got to this point.

It's hours of practice.

Its hours of blood, sweat & tears and honoring feedback and taking it and using it.

Then bringing myself again to the table.


The Rainbow Evolution Retreat, was that saga that I dived into, an opportunity to B-R-I-N-G I-T!

I came out feeling a little taller and prouder, knowing that I have grabbed at the opportunity, to do something for myself.

This intense mind, body, retreat was full-on at every second of it, from the planning, to the facilitating, to the coaching.

The rewards? It's the hard but truly fun work itself.

The results? I have my essence in my being.

I could not have done it with the people there.

I could never have gotten there without the support from friends who would hold me accountable to my dreams and wishes.

People who were willing to give me a chance.

People who give me a platform to be me.

People who were there at every second of it.

For that my peeps, I am super grateful.

How blessed am I to spend 6 days with you :)


Many people at times refuse to go the distance, to reach their dreams, to live their lives.

Many youths of today too, feel the same.

When an opportunity is there, they stay at the sidelines, laughing at the man or woman in the field saying that they are fool.

Because they are foolish.

Because they are wasting time.

Because it's takes too much effort.

Because failing would be too embarrassing.

Why bother, there's no point anyway? Not like you will get anything back?

I hope it isn't, because you are sacrificing your life and holding your self back for fear for embarrassment.


The Rainbow Evolution Retreat taught me to live in full color.

Because, if you share all of your colors with life, you will find yourself back.

That's The Rainbow Evolution Retreat, claiming every color of your being and living fully in the moment.


To you, my friends, Namaste.