There's a possibility after attempting the last 4 posts, you feel worst.

You feel your brain is fried and you want to scramble your funk.

Well, at least I got a beep alert that some peeps did not feel good after attempting the exercise.

Yes you have been conned into looking inside MUAHAHAHAHHAHAHAHAHAHHAHA.

It really is a stress relief reaction.

It is knowing what is underneath that is causing the stress.

You can't let something go that you don't know you have it.

You can even feel your own fart as it exits your body.

"There's something in there, oops it came out!"

Organic farmers rejoice at the side of poop. Some even burst into Disney musicals as they skip and hop to get a shovel to shovel up the poop to be used as fertilizer.

The interesting thing is, they will put the poop at a distant from a plant.

I learnt this at a farm called GK Organic farm. The farmer explained that it is too rich if you put it too close, you might overwhelm the plant.

By putting it at a distance, the plant gets to absorb it bit by bit as the rain pours and spread that shit across the earth.

Too much is always not a good thing.

Likewise for you too. Space that shit away from you. Shovel at it and absorb it bit by bit.

I had to do this shit too.

At the beginning of these trainings at both very different times, I kept digging and finding some real crappy feelings. The facilitators nodded and smiled, because they knew it was a great thing.

I was finally telling the truth.

No social nice-ities, no pretense, just the truth.

I feel crappy and that's okay.

I am so angry and that's okay.

I am so sad and that's okay.

I am manic and that's okay.

I feel crazy and that's okay.

I need to curl up in fetal position and not talk for a while, that's okay.

I need a few months to rest and that's okay.

Even if it is just 5 minutes a day.

Let's face it. Life can suck. Life can be busy. Improvising with our schedules by injecting a bit of what you need everyday is not pointless.

It helps a lot.

Move that energy. Sound that energy. Breathe. Just Breathe. Animals shake violently after a big fight to dispel energy built ups in their body, so that they can relax.

Eventually you will have an itch to act on some inspiration.

Scratch it, for you are ready to act.

Pretty soon, you are bearing fruit and you look back and see the fruit of your poop. 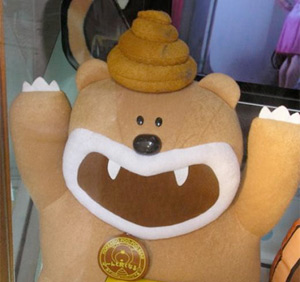 This bear is hilarious, I have no idea who created this but he/she is a genius!